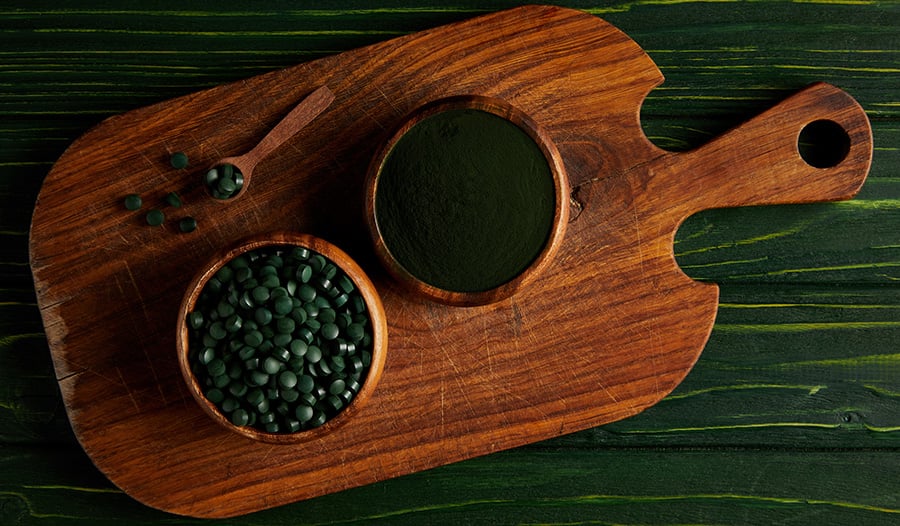 While images of slime growing in stagnant water may come to mind when you hear the term “algae”, this plant is actually consumed by many around the world. Its two most common forms, chlorella and spirulina, are commonly available in both capsule and powder formulations and have numerous health benefits.

Chlorella is a unicellular green algae which is rich in the following vitamins, minerals, and nutrients:

Oxidation is the process by which we age and develop chronic disease. Certain behaviors such as tobacco use and heavy alcohol intake cause excess oxidation and accelerate the aging process. In theory, slowing down this process has numerous health advantages.

A healthy diet is important in providing the body with the resources needed to help protect against oxidation. Chlorella can also play a role. A 2010 study in Nutrition concluded that the “… results are supportive of an antioxidant role for chlorella and indicate that chlorella is an important whole-food supplement that should be included as a key component of a healthy diet.” A 1995 study also demonstrated chlorella’s antioxidant status.

However, some prefer more natural approaches, and chlorella is a supplement that may be beneficial. A 2006 study using rats showed that chlorella could help lower blood pressure. This benefit has been known since 1978 when similar studies showed blood-pressure-lowering properties. More recently, a 2018 study in Clinical Nutrition showed that chlorella supplementation could help lower blood pressure in test subjects. Those with high blood pressure should work closely with their physician before making any adjustments to their medications.

High cholesterol is believed to be a risk factor for heart attacks. Achieving optimal cholesterol levels is important for those trying to reduce this risk, and prescription cholesterol medications are frequently prescribed.

Prediabetes and diabetes are becoming more prominent as the world population’s average weight becomes heavier. Elevated blood sugar increases the risk of heart disease, stroke, and dementia.  Reduced intake of both sugar and simple carbohydrates is important, and diet should be closely monitored. In a prior article, I discussed natural approaches to diabetes. And while I didn’t mention chlorella, in a 2015 study, researchers showed that the supplement could help lower glucose levels in test subjects.

Chlorella and Removing Toxins From the Body

Avoiding contaminated food and water is important to prevent toxic buildup. In addition, the ability of our body to remove toxins is also very important. The idea that chlorella could be useful in removing toxins has been explored since 1984, according to a study in Drug and Chemical Toxicity. Supplements like NAC can also be beneficial.

Spirulina is considered a superfood by many. It is an easily digestible nutritional supplement, which belongs to a family of blue-green algae. Spirulina was used centuries ago by the Aztecs, according to Spanish records from the conquistadors — it grew in Lake Texcoco, Mexico, where the Aztecs called it tecuilati.

Spirulina acts as a prebiotic and helps the growth of other beneficial bacteria in the gut. It also contains chlorophyll, which helps alkalinize (optimize pH levels) the body’s tissues.

Spirulina contains compounds, including chlorophyll, beta carotene, zeaxanthin, and phycocyanin, which are potent antioxidants that can neutralize oxidation damage caused by free radicals, a leading cause of chronic disease. Finding a way to allow the body to protect itself from this process is crucial in disease prevention.

A more recent study from 2014 showed that one gram of spirulina taken daily could lower total cholesterol by 16 percent when taken for four months. Spirulina also lowered triglycerides (fats) and LDL (bad) cholesterol. A 2015 study confirmed spirulina’s cholesterol-lowering benefits in those who supplement with it.

Type 2 diabetes is a leading contributor to heart disease, strokes, kidney disease, and memory impairment. A person with type 2 diabetes can control their glucose levels by watching their diet and exercising. Oral medications are frequently prescribed to those who need further assistance. Spirulina may also be a useful addition to a daily routine.

Studies using animal models show spirulina can be helpful in controlling blood sugar and preventing complications from diabetes, such as diabetic kidney disease. Another study showed spirulina used topically may be useful in the treatment of diabetic wounds. However, more research needs to be conducted before it becomes common use.

Spirulina and Anti-inflammation Help for Arthritis

The word arthritis comes from the Greek word “arthron”, which means "joint" and the Latin word “itis”, which mean "inflammation". Arthritis literally means “inflammation of the joint”. In general, there are two main types of arthritis. The most common is osteoarthritis (~95%), which occurs as we age. The second, and least common, is rheumatoid arthritis (~5%), an auto-immune condition.

A 2006 study showed that spirulina had anti-inflammatory properties and could help with all arthritis-related pain. A more recent study in 2015 showed similar findings, indicating that spirulina decreased inflammation by lowering blood levels of COX-2, an enzyme targeted by NSAID (Non-steroidal Anti-inflammatory Drugs), like ibuprofen and naproxen, minus the pharmaceutical side effects.

Spirulina and Detoxification For The Body

Spirulina can help detoxify the body from heavy metals. Arsenic, which is associated with increased risk for neurological disease and diabetes, can be detoxified from the body using spirulina’s health properties according to a study from India, where the local water supply had high levels of arsenic.

As the population ages, neurodegenerative diseases become more common. A healthy diet, physical exercise, and brain puzzles such as word searches and crossword puzzles, can all be used as part of a holistic approach in preventing cognitive impairment in the aging brain.

Spirulina may also play a role. A 2010 study in the Journal of Alzheimer’s Disease showed that spirulina, in addition to a few other supplements like curcumin, may prevent the formation of amyloid plaques, which are believed to be the cause of Alzheimer’s disease.

As a person ages, they are at increased risk for cataract formation, which occurs when the lens of the eye becomes cloudy due to oxidation. Studies from 2013 and 2014 show that phycocyanin, the active ingredient in spirulina, can help prevent cataracts from forming. Prevention is the best medicine!

Fibromyalgia is commonly diagnosed when a person has diffuse body pain and muscle tenderness and no other cause can be found. Women are more likely to be affected than men. For many, a “leaky gut” may be a contributing factor. A small study showed that spirulina may be helpful in reducing symptoms of fibromyalgia. This is possibly due to its prebiotic (a food for the intestine’s good bacteria) capacity and its ability to detoxify the body from toxins.

Previous Article
Keep these Meal Prep Staples Stocked in Your Pantry
Next Article
Are Pre-Workout Supplements as Good Without the Caffeine?