In 1513, Spanish explorer Juan Ponce de León and his fellow conquistadors landed in what we now known as Florida. Legend tells us that he and his crew were searching for the fabled "fountain of youth.” Of course, they never found it, but centuries later, many are still searching for a magic forever-young solution. And while it’s impossible to turn back the clock, scientists have discovered more about slowing down the effects of aging.

Aging is a natural process that every living thing experiences — from the time we are born, our cells enter the life-death process. Despite this reality, the law of self-preservation motivates many of us to try to slow down the process. I’ve been asked by patients dealing with the effects of getting older why we have to age in the first place. Even among scientists, the reasons are not completely understood; however, various theories have been proposed, and studies are numerous.

The hope is that once we understand why we age, perhaps we can slow down the process while simultaneously reducing the likelihood of developing age-related ailments such as arthritis, heart disease, memory loss, and even gray hair.

While we continue to study this area, we do know that the aging trajectory can be altered by making certain lifestyle changes. These diet and lifestyle changes can potentially turn on life-preserving genes while simultaneously turning off disease-causing and age-provoking genes,  an idea known as epigenetics.

Our inherited genes do not completely determine our genetic destiny.  Regular exercise along with a well-wounded diet rich in vitamins, minerals, green leafy vegetables, nuts, seeds, and cultured foods are also important in promoting disease resistance and a longer lifespan.  There are other behaviors that have also been shown to help:

Studies show reducing caloric intake by 30 percent has life-extending properties. While difficult for many, consuming a low-sugar diet that contains minimal processed foods and simple carbohydrates can make eating fewer calories easier. Intermittent fasting can be helpful. Simply going from three meals per day to two can result in a 33-percent reduction in calories.

Tobacco use is the leading cause of self-inflicted premature aging, heart disease, and death worldwide. Use results in more than 7 million premature deaths per year, worldwide. I frequently tell my patients that tobacco use pushes the fast-forward button of life.

The following supplements are also taken by many to help reduce the aging process, symptoms of chronic disease, and the physical appearance of aging.

As we age, we produce less collagen. This along with life’s stressors and resulting in oxidative damage results in wrinkles. Taking collagen could possibly help. A 2008 study concluded that collagen peptide (protein) is beneficial as a dietary supplement to suppress UV-B-induced skin damage and sun-related aging. Later, a 2015 study in the Journal of Cosmetic Dermatology reported similar results with oral collagen supplementation. The researchers concluded, “The oral supplementation with collagen peptides is efficacious to improve hallmarks of skin aging”.

A 2014 study concluded that collagen supplementation enhanced skin hydration and elasticity. That same year, another study had test subjects take a combination of collagen (3 mg/day) and astaxanthin (2mg/day) versus a placebo. Those who took the supplements had improved skin elasticity and barrier protection.

For these reasons, I consider collagen an anti-aging supplement. Collagen is available in the form of capsules, powders and as a topical serum which can be applied directly to the skin.

Coenzyme Q10 (CoQ10), also known as ubiquinone, is a naturally occurring antioxidant nutrient required for all life. Coenzyme Q10 is required for our cells to generate energy, in the form of a molecule called ATP.  This energy creation is done in part by mitochondria, cellular power plants that generate all energy in the body.

As we age, the blood and cellular levels of CoQ10 decrease. This is due primarily to reduced production and reduced absorption from foods by our intestinal tract.

Cognitive impairment and dementia are becoming more prevalent as the world population ages, causing a significant hardship for both the affected person and caretakers. Studies have shown reduced levels of CoQ10 in the blood increase the risk of developing dementia and Alzheimer’s disease.

A 2015 study showed CoQ10 at doses of 100 mg three times per day could help slow cognitive decline in those with Parkinson’s disease. Other studies show CoQ10 plays an important role in helping to improve function and memory in those with Alzheimer’s disease.

Coenzyme Q10 prevents common age-related conditions such as macular degeneration of the eyes. Cosmetically, facial wrinkles may be reduced with topical CoQ10 application.

Available in capsule and topical formulations. Suggest oral dose is 100 to 300 mg per day.

Omega-3 fatty acids, also known as polyunsaturated fatty acids or PUFAs, play an important role in human health. They are believed to have numerous benefits for the heart, brain, and joints.  Omega-3s also help reduce inflammation commonly seen in older populations. A 2014 study in Nutrition Journal showed that the majority of people do not consume enough essential fatty acids in their diet, which may lead to health problems commonly associated with aging.

A 2017 study showed that omega-3 fatty acids resulted in significant improvement in vascular function and lowering of blood pressure. A study from the same year in Future Science showed omega-3 fish oils can reduce inflammation that leads to heart disease. Another 2017 study in Atherosclerosis showed that higher levels of omega-3 in the blood could reduce death from heart disease — the leading killer of people worldwide —by 30 percent.

Omega-3 fatty acids can be found in a variety of food sources, including fish (mackerel, cod, and salmon are among the richest), walnuts, chia seeds, flax seeds, hemp seeds, avocado, and natto. In addition to diet, these important nutrients can be taken in capsules or liquid formulations.  The suggested dose ranges from 1,000 mg to 4,000 mg per day.

According to some scientists, resveratrol may be a life-preserving compound. Some studies show that it has the ability to help prevent age-related cataracts, vascular disease, brain disorders like dementia, and other chronic diseases. Resveratrol may also help increase lifespan due to an effect on telomeres according to a 2018 study in Biofactors.

Food  sources of resveratrol include:

Scientists have also discovered a few lifestyle behaviors which help preserve the telomeres, the tips of our DNA, from shortening. These include routine exercise (at least 30 minutes of moderate exercise five times per week) and reducing food intake by 30 percent, which can extend lifespan.

Supplemental resveratrol also has a similar effect on our DNA, according to scientific studies. Resveratrol activates the SIRT1 and SIRT2 genes, which make proteins that are responsible for extending the lifespan.

A 2018 study of resveratrol’s effects on mouse kidneys showed some promising results and showed that when administered, the pathologic effects seen in an aging kidney were diminished.

A potent antioxidant, pine bark extract, or pycnogenol, was originally used by indigenous people of North America and Asia as a medicinal herb. French expeditioner Jacques Cartier, who “claimed”  Canada for France, reportedly used pine bark extract in 1535 during his expedition as a treatment for scurvy, a condition caused by insufficient levels of vitamin C intake.

Antioxidants are substances that protect tissue and organs against damaging free radicals, a mechanism of oxidation that results in aging. A study in Ophthalmic Research demonstrated that the antioxidant potency of pycnogenol was more powerful than vitamin C, vitamin E, alpha-lipoic acid, and coenzyme Q10.

Another benefit of pine bark extract is that it appears to help protect the skin. Its strong antioxidant power can help shield skin against ultraviolet sunlight damage and can even be applied topically to the face. Its antioxidant properties also help protect the collagen and elastic tissue from oxidative damage, the primary cause of skin aging.

Pine bark extract is available in both capsule and topical formulas.

Turmeric, also known as Curcuma longa or Indian saffron, is a rooted plant of the ginger family, often consumed for its anti-inflammatory, antioxidant, and digestive-health properties. Curcumin,  the primary molecule found in turmeric, is believed to provide many of the health benefits. While many people have used turmeric as a spice to enhance their food for over the past 4,000 years, turmeric has played an important role in medicine and anti-aging as well.

Turmeric can help prevent oxidation, believed by many to be the main cause of the aging process, according to a 2016 report in Diseases. A 2017 study in Neural Regeneration Research showed that turmeric helps protect the nerve connections in the brain from inflammation and oxidative damage, both common processes of aging.

Memory loss is also a common ailment many face as we mature. Turmeric may be beneficial. One scientific study showed that turmeric may play a role in decreasing amyloid plaque buildup in the brain. The plaque is believed to be the cause of Alzheimer’s disease. A 2017

study in the Journal of Alzheimer’s Disease concluded that turmeric could also play an important role in preventing memory loss. Those who want to keep their brain more youthful should consider adding turmeric to their supplement regimen.

Turmeric is available as capsules, powder, tea and as a food spice.

Vitamin C is also known as ascorbic acid or ascorbate. It has been one of the most researched vitamins over the last 50 years. More than 53,000 studies have been conducted on vitamin C since 1968. The research shows that vitamin C helps promote a stronger immune system as well as cardiovascular, brain, and anti-aging skin health.

In addition, the application of topical vitamin C directly to the face and other parts of the body is helpful in protecting the skin against solar damage, according to studies. Vitamin C is available as an oral supplement, powder, and topical formulations for the skin.

Certain essential oils are also frequently used due to their believed anti-aging, anti-wrinkle, and skin-beautifying properties. Some of the most commonly used include frankincense, jojoba, lavender, pomegranate seed oil, and rosehips. They are applied topically. However, one should apply to the non-face area first to ensure no local irritation results.

Previous Article
How to Get Moving Again When You Have Plantar Fasciitis
Next Article
Work Out Smarter, Not Harder With These Fitness Tips

Instead of a store-bought gift add a more thoughtful and sustainable touch to your Mother's Day gift by making it at home with natural ingredients. 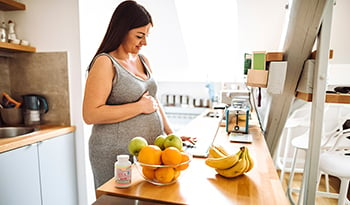 7 Natural Supplements For Optimizing Fertility In Men And Women

Infertility is a common issue worldwide. A doctor discusses natural lifestyle approaches and supplements that may help improve the odds of becoming pregnant.